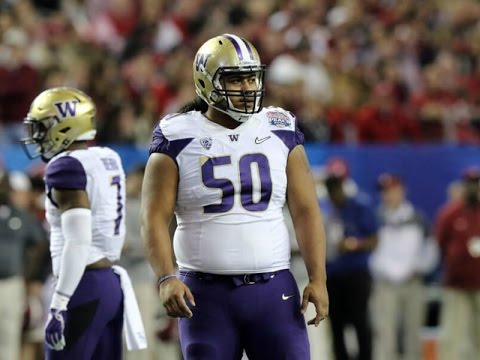 At 6-foot-5 and 340 pounds (school measurements), Vea has the size and strength to dominate as a nose tackle, But he has the agility and quickness to play outside at defensive end (DE) in a 3-4 scheme.  According to CFB 24/7, Vea is rated number 5 on the list of college defenders that are most likely to become NFL stars. Vea is ranked top 10 in both pass rush and run stopping percentage according to Pro Football Focus (PFF)

Some stats for Vea going into his last game of his Junior season vs Penn State, 93 total tackles, 15 tackles for loss, 9.5 sacks, 5 pass deflections, and 2 forced fumbles.

Vea projects to the NFL as a nose tackle who can be extremely strong at the point of attack. Vea uses his size with strength to eat up blockers. For as big as Vea is he has a quick burst off the snap, The combination of his size, power along with quickness is to much for smaller interior offensive lineman. But he is at his best when he bull rushes and using his strength with power to push back and through blockers to get to the quarterback or get to the ball carrier behind the line or at the line of scrimmage. I also like his motor, he doesn’t give up on plays even when they go away from him.

In the run game, Vea tends to sometimes get caught standing up too high. Which allows the guards to get under him pushing him back. Vea is a very good run defender but he isn’t a dominant one due to him getting caught standing too high. I’m very sure at the next level his coaches will teach to stay low at the point of attack.

In the game against Stanford Vea was doubled team constantly, And when he wasn’t he was in on the play almost every time. And even when doubled team he would be in on the play. It wouldn’t surprise me if at the combine Vea will bench press 225 pounds 35 to 40 times. Scouts were thinking Vea would come out last year and raved and loved his play and said he would’ve been a first round pick in last years draft. I have no doubt Vea will be drafted in the first round of the 2018 NFL Draft.