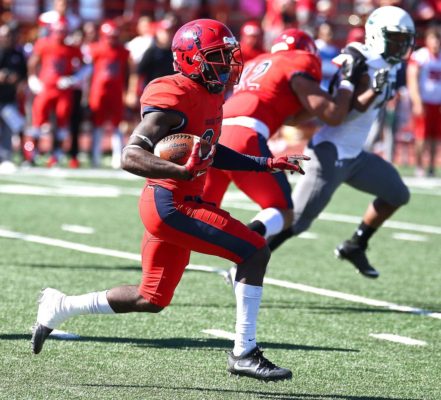 Our scouting report of Tyneil was completed by Brandon Davis our lead scout: Go follow him on Twitter

Strengths: Cooper plays bigger than his listed height & weight with decent ball skills. He has okay feet and decent hips. He plays with above average man coverage skills, staying on a receiver’s hip, or back pocket. He shows the ability to pin receivers to the perimeter or sideline against deep routes in man coverage. Has great instincts in zone coverage against short & medium pass routes. Goes for the wrap-up tackle in run support, and in the open field. Is versatile enough to line up on the outside, on the inside against slot receivers as a nickel/slot corner, and in multiple positions on special teams.

Weaknesses: Cooper has below average size and arm length for a typical outside cornerback. He tends to round off his breaks when driving towards the ball to make a play. Has marginal strength when pressing receivers at the line of scrimmage. He can get spun around at times against double moves. His ability to play effective zone coverage against deep routes will be questioned. Has low production numbers.

Summary: In his two-year career as a Dixie State Trailblazer, Cooper recorded a total of 61 tackles, 1 interception, and 17 pass breakups, to go along with an All-RMAC first team selection in 2016, and an All-RMAC honorable mention selection in 2017. Cooper’s lack of size will take him out of consideration for lining up on the outside. Despite that, he plays bigger than his frame with okay feet, hips, and decent ball skills. He will have to improve on his breaks, press strength, zone coverage skills against deep routes, and his discipline against double moves as he transitions to the pro level. While he is a versatile player, his best bet for making a pro roster will be as a free agent at the nickel/slot cornerback position, or on special teams.