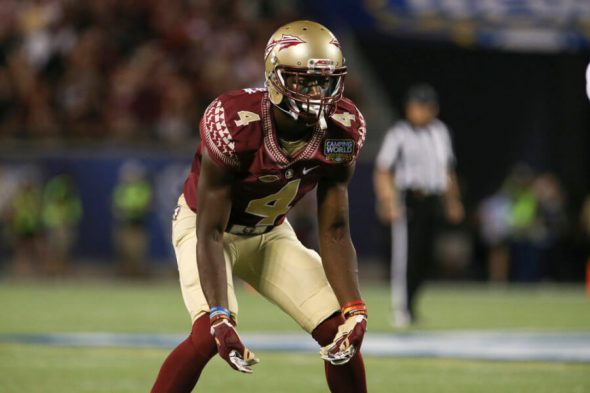 Cornerback Tarvarus McFadden stands 6’3 205 pounds and as the ability and size to play press against the bigger NFL wide receivers. McFadden has amazing length for a corner, He uses his arms really well to get his hands on his receivers to alter their route. He also has great ball skills which turned into eight interceptions. All of which came in his sophomore year.

He does a great job quickly getting his head around and tracking the football. This allows him to get in proper position to attack the football. In fact, he often finds himself in a better position to come down with the ball than the wide receiver. McFadden also features very good hands with the ability to high point the ball and able to catch the ball in the air. He is a very good athlete that can quickly close on his receiver. He’s better when he is set in man coverage. Which allows him to use his ball skills better than in zone.

When he plays off coverage, he flashes an impressive closing burst to drive on the ball in front and produce big hits. He plays with an effort to chase plays from the backside and I’ve been impressed with his overall instincts for the position.  He’s a fluid athlete and he has plenty of deep speed to carry wide receivers down the field for the most part unless they’re elite runners. He also primarily aligns in press coverage and he excels in trail coverage

Two issues with McFadden is he will get beat on the deep ball from time to time. He needs to prove that he has long speed and can keep up with the fast wide receivers at the next level. The second issue with McFadden is his lack in the run game, He is capable of tackling ball carriers with his size. But he sometimes doesn’t always give a 100 percent effort.

Overall, McFadden is a highly talented prospect with tons of upside. His ball skills are rare and make him someone NFL teams will covet. However, he needs to play with more consistency and show more effort versus the run.McFadden isn’t quite a finish product just yet. But the upside with him is another Ramsey (top 3-5 corner in the NFL.) The size, length and the capable ball skills that can develop into an elite corner at the NFL level.
Related Topics2018 nfl draft2018 nfl draft prospect2018 prospect interviewmalik reavesNFL Draftnfl draft 2018nfl draft notesNFL Draft Prospectnfl draft rumors