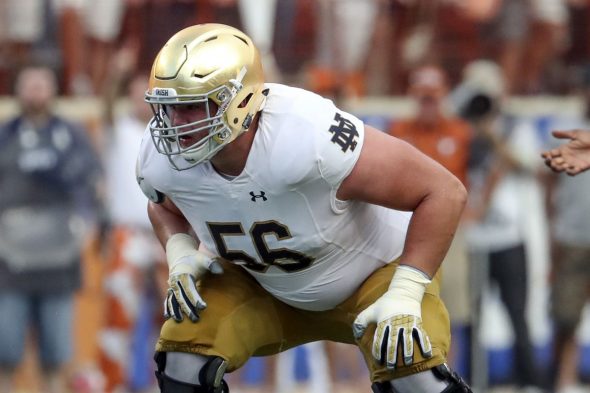 Nelson as been named the best interior offensive line player in the 2018 NFL Draft. And sitting at 6’5 330 pounds Nelson is an absolute beast at the guard position. Nelson is a senior that as completely dominated this season.

In 2016 Nelson played tackle when Ronnie Stanley left for the NFL Draft. Nelson is as well rounded of a player as they come for being a offensive line prospect, but his best value comes from his ability to open up massive lanes in the running game. Nelson does a great job in zone blocking schemes in the run game. He turns the defenders shoulders to open up the running lanes very well. If Nelson gets his hands on you he has the grip and power to make it a very hard task for any defender to get off the block to make the tackle.

Nelson has the nasty streak that any offensive line coach would love to have. And he’s been this way since he was a little kid. His dad recalls when he was just 10 years old playing with 12 year old kids and the ref had to come up to Craig Nelson and tells him you have to talk to no. 53, He is out here spearing kids.

Nelson’s type of awareness has NFL scouts and executives drooling and loving him. In the passing game Nelson always has his head on a swivel looking for blitzers and someone to block. The footwork and technique he has allows him to be in position to make key blocks when the time comes. Nelson is valued as a plug in and play starter from day one.

Nelson will from time to time whiff pretty bad when he is pulling on the edge and even though he wins the physical match-up with just about every defender on the field. Being able to square up players at the second level and on the edge on pulling plays are a big key factor in many NFL offenses.