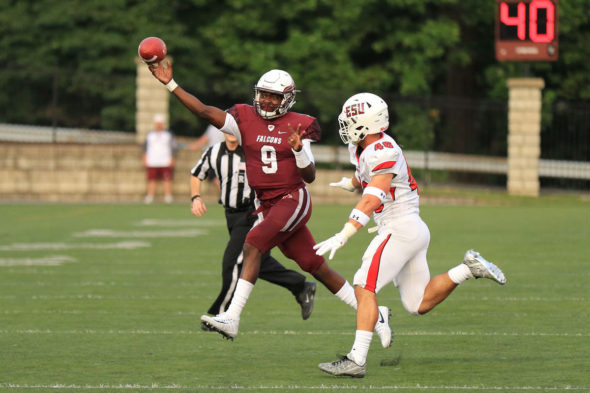 Strengths: Young-Battle is an athlete that looks to make plays with either his arm, or his feet. He shows the ability to make throws into tight windows with decent accuracy with a gunslinger-like mentality. His arm strength is okay, but it’s best on display when he throws deep. He can make most throws with pretty good touch. While he can throw on the run, he is willing to stay in the pocket to make a throw before being hit by a pass rusher. On film, he can extend plays with his legs, and throw pretty accurately on the run. While he is a threat when he runs, he tends to pass the ball first before tucking it away and running.

Weaknesses: Young-Battle lacks the height & build that most NFL coaches look for in a QB. His main issue on film is that while accurate, he doesn’t throw many short & medium passes with much zip. While he is a great athlete, he only seems to make only one or two reads before taking off from the pocket. He throws passes with a bit of a wind-up, and a slow release, causing balls to end up where his receiver is instead of leading them. Despite having quick feet, he doesn’t always set them, or reset them when throwing. His ability to line up under center will be questioned, as well as his production against higher level competition.

Summary: Young-Battle was an All-American QB recruit at the junior college level in 2015, throwing for 3118 yards & 26 touchdowns, and rushing for 507 yards & 5 touchdowns. At Alabama State & Fairmont State, his production dropped as he threw for 449 yards and two touchdowns in 2016, and he threw for 1553 yards & 11 touchdowns to go along with 62 rushing yards & 2 touchdowns in 2017. While he is a QB that can make most throws with okay strength, touch, and decent accuracy from the pocket, he has a slow release, doesn’t use much zip, and doesn’t always set & reset his feet. At the pro level, he’ll need to show that he can make more than one or two reads in his progressions before looking to extend plays and run with his feet. As I watched him on film, his game reminded me a bit of Robert Griffin III. Overall, I see him as an undrafted free agent that could get an invite to a minicamp or training camp for a team that’s willing to help him develop into a productive QB.