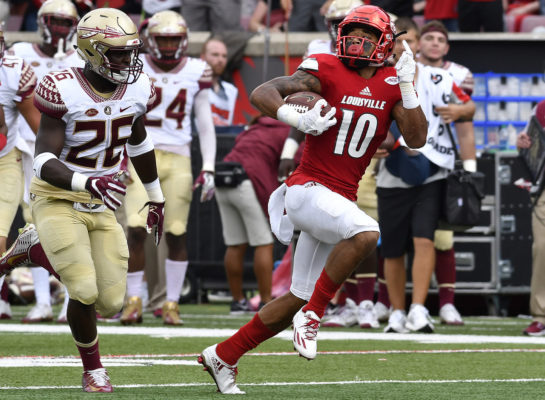 Louisville CB Jaire Alexander entered the 2017 college season as a Day 2 projection for the NFL draft to most people and is ranked among the top CBs on Pro Football Focus (PFF’s) draft board. I looked at Alexander as a possible 1st round pick depending on what he would accomplish this season.

In 2017 Alexander played 844 of 933 possible snaps for the Louisville Cardinals in a season that saw him emerge as one of the best cover cornerbacks in the nation. He ended last season with a (PFF) overall grade of 87.4, ranking No. 5 of 269 qualifying cornerbacks. He also ended the season with 5 interceptions with 9 pass deflections on 60 targets.

Alexander has good size for a corner, He’s not big but he isn’t small either at 5’11 for 192. Last season playing Clemson Alexander did a good job guarding Mike Williams who was a top 10 pick in the 2017 NFL Draft.

Jaire Alexander has established himself as a playmaker who can impact the game on defense and in the return game in punt and kick return duty. Alexander’s aggressive style of play is fun to watch.

He is a ball hawk who uses his instincts, quickness, and trust within himself that he can make that play allows him to generate turnovers. His ability to read the quarterback and break on the ball gives him an edge. Alexander does a great job undercutting the route for the interception. In man coverage, Alexander is able to turn his head around to locate the ball and get his hands on it and not get called for a pass interference. That is something that all the top corners do very well in the NFL. When you look at Sherman, Peterson, Peters, Norman, Ramsey, and Bouye. They all turn their heads to locate the ball.

The biggest concern about Jaire isn’t his ability to cover or tackle. It’s his ability to stay healthy This season he has missed some time with a knee injury, Then once back broke his hand and had to miss more time. Anytime you look at taking a player in the first round he must be able to play a full season.