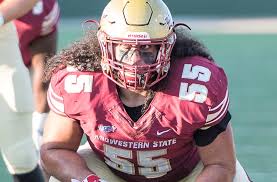 Strengths: Sbeih has a thick frame for an offensive lineman. He has good awareness while run blocking, and in pass protection. He plays each down with good effort, and looks to finish each play by putting a defender on the ground with his blocks. While blocking, he plays with an okay base, quick hands, and decent leverage, allowing him to keep his defender locked up. His quick feet allow him to get to the second level when needed, and allows him to pull on counters & outside runs.

Weaknesses: While Sbeih does have a thick build & frame, his height at 6’1” is below average. Despite having a good base, he blocks with a high pad level, and with very little drive to be able to push a defender backwards. When going against bigger defenders, he can be jolted by them, causing him to lose his leverage. His hand placement needs work as well.

Summary: Sbeih is a tough & competitive guard who was a two-year starter for the Midwestern State Mustangs in 2016 & 2017. He has a thick frame with decent arm length. He has good awareness in the run & pass games, and plays with good effort despite not having much drive. While he has an okay base & quick hands, he plays with a high pad level. At the next level, he’ll need to improve on his hand placement, and he’ll need to show that he can drive defenders back with strength more instead of relying on technique. Right now, I can picture Sbeih as a player that a team can bring in as a free agent who can be developed into a serviceable guard.