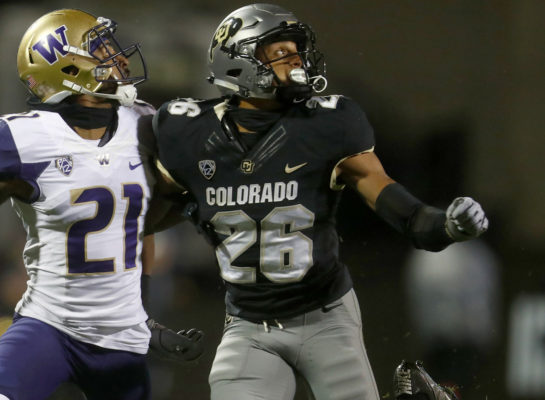 Isaiah Oliver, A 6’1 195 pound defensive back for the Colorado Buffalos. majoring in Strategic Communication with a minor in Business at Colorado. He earned honorable mention Academic All-Colorado honors from the state’s NFF chapter as a true freshman. Before Colorado he was a track star at his high school in Phoenix Arizona.

As a sophomore Oliver played 517 snaps in 2016, the 6-foot 1-inch 190 pound Oliver recorded overall and coverage grades of 80.7 according to Pro Football Focus (PFF) Looking ahead to Oliver’s NFL prospects, Heavily respected B/R draft analyst Matt Miller has the Colorado star ranked as his No. 3 cornerback in the 2018 class and as the No. 21 overall prospect on his latest big board. Miller’s most recent mock draft projects Oliver will be taken by the Seattle Seahawks with the 24th selection, noting it could be time for the team to think about Richard Sherman’s long-term future as he is set to turn 30 in March.

WHAT HE DOES BEST:
• Good size, physical. Will play through the ball.
• Athletic playing the ball in the air. Forced an incompletion on 21.0 percent of targets, 19th-best among
draft-eligible cornerbacks.
• Plays the deep ball well. Finished with the No. 11 grade in the nation on passes thrown 20-plus yards in the air.

Oliver shows good overall athleticism including strong recovery speed. Colorado uses Oliver in both man and zone coverage. However, he is at his best when asked to turn and run with his target. This allows him to use his length and ability to track the football. His awareness and ability to get to turn his head around helps him keep the ball out of the receiver’s hands. However, this is a part of his game that has some inconsistency. There are times where Oliver fails to turn his head and will make too much contact with the receiver. This results in pass interference calls as well has he tends to get sloppy with his footwork.

Overall, Oliver is a player who has the size and speed to be the true number 1 shutdown corner in the NFL. Oliver also has the ball skills needed to create turnovers. ( I know he didn’t get a lot of interceptions. But that’s in large part due to quarterbacks not challenging him.) But the biggest key for Oliver at the next level will be his ability to take to coaching positively and improve his technique.