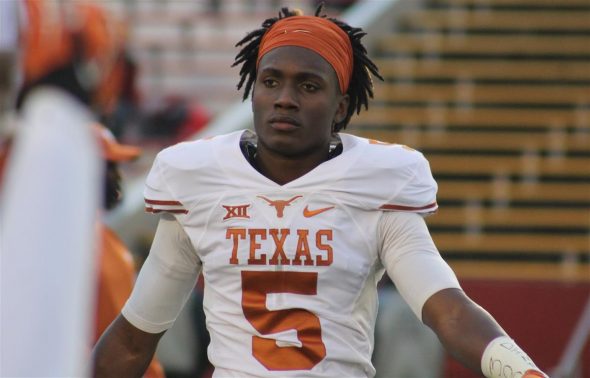 Holton Hill is a big corner standing in at 6’3 200 pounds coming out of Texas. Hill has decided to enter the 2018 NFL Draft. While safety DeShon Elliott steals the spotlight with his six interceptions. Cornerback Holton Hill has arguably been the defense’s best player.

Hill has two picks on the season, but more importantly has been stout covering his opponents’ best receivers. The 6-3 cornerback is also unafraid to crash into the backfield on run support, delivering hard hits on opposing ball carriers. Hill looks forward to playing against the best receiver each week.

Hill was pretty much required to take a step forward into his junior season. And he has came on as a lockdown cornerback for a longhorns and a sure tackler on the perimeter and his confidence level has radiated throughout a Texas defense. Hill has very good arm length mixed with his toughness to come in the box and attack the ball carrier along with 4.5 speed.

Hill has managed in his Junior season to tally up 51 tackles (122 total for 25 games) 2 interceptions (3 total) 2 touchdowns (3 total) 6 pass deflections (8 total) and 1 total force fumbles. Hill didn’t get targeted a lot as a Junior. According to Bleacher Report they have three Texas Longhorns going in the 1st round. And Hill is the 2nd one.

The problem I do have with Hill is that he got suspended for violating team rules. Hill also joins Williams and Elliott in not playing in the team bowl game.