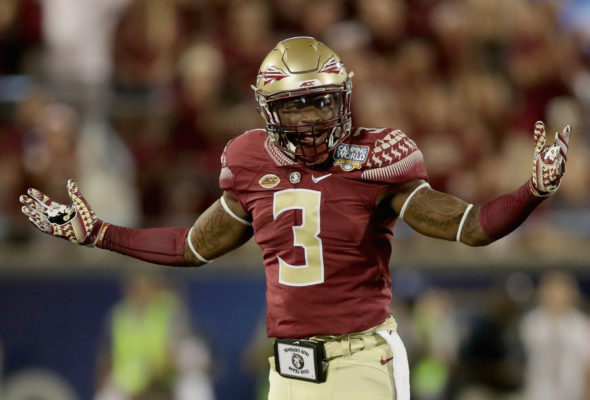 As we closer to the end of the college football season there will be more mentions on players who will declare for the 2018 NFL Draft. As of now there are a few big name underclassmen that have said they plan on entering the draft.

Safety Derwin James, one of the top defensive backs in the nation has declared for the draft. James has said he will not be playing in the Seminoles’ bowl game as well. James who stands (6’3 2010 pounds) is talked about being a top 2 pick this season. He finishes his career at Florida State with 186 tackles with 15 of them coming for a loss. He also tallied a total of 5.5 sacks with 3 interceptions for his career.

There’s noise going around that James isn’t the only Florida State player that could be leaving at the end of the season. Defensive end Josh Sweat (6’5/250/DE/OLB) And big tall wide receiver Auden Tate (6’5/225/WR) Also are players that are potentially going into the draft. As well as 4 year tight end Ryan Izzo (6’5/245/TE) Is also considering the draft with one of the top rated corners in FBS Tarvarus McFadden (6’2/ 200/DB) Is expected to leave Florida State for the draft as he is projected to be a first round pick.

Duke Dawson, Cornerback for the Florida Gators will not only be attending the draft. But Dawson and fellow teammate Johnny Townsend little time accepting to play in the Reese’s Senior Bowl game. Dawson who stands 5’10 208 pounds is possibly a second or third round pick. Dawson who this past season was targeted 48 times allowed only 21 catches. And finished with a passer rating of 37.1 according to Pro Football Focus (PFF) Which was good for 2nd lowest in the SEC. Taven Bryan, Also from Florida (6’5/293/DE) has been said to be thinking about declaring for the NFL Draft as well.

Harold Landry as accepted his invitation to the 2018 Reese’s Senior Bowl. Landry is slated to be a first round pick and possibly slide down into the early second round. Landry who stands 6’3 250 pounds is a defensive end in a 4-3 scheme, But if drafted into a 3-4 scheme he will be positioned at outside linebacker. Landry totaled 158 tackles with 48 for loss, 25 sacks, along with 1 interception, 6 pass deflections and 10 forced fumbles. He as missed the last 4 games of Boston College regular season with an ankle injury and is undetermined if he will play in the New Era Pinstripe Bowl against Iowa on 12/27/2017

Wisconsin may be losing one of its cornerbacks. Nick Nelson (JR/5’11/208) Has been telling teammates and people close to him that he is choosing to enter the draft. In fact he is saying that he is close to choosing an agent as well. Nelson played his freshman and sophomore years at Hawaii before transferring to Wisconsin. Nelson who tallied 34 tackles in his junior year. Not as impressive has his 51 tackles his sophomore year. But he did improve on his pass breakups in his Junior year going from 18 to 20. He was also his teams punt returner. Nelson returned 22 punts for 186 yards (8.5 per return) and one touchdown. Nelson however didn’t tally a single interception in his 3 year career. He does however have good ball skills and is able to line up in man coverage. He is an aggressive player who isn’t afraid to get in on tackles. Nick Nelson is projected to be a mid round selection.

This piece was put together by Cody Ladue, NFL Draft Diamonds latest addition.