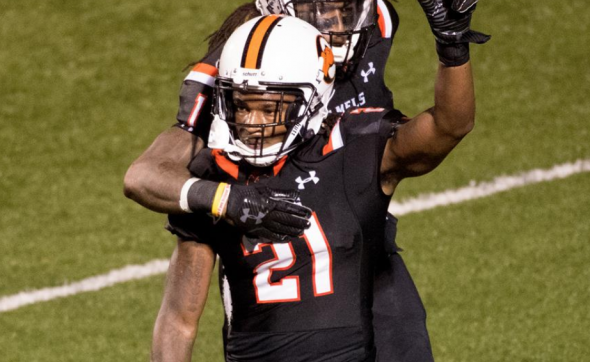 My Dad, and Coach Minter. My dad inspires me because he did such a good job raising me without having a father figure of his own. Coach Minter because of his credibility, understanding of people, and knowing how to deal with situations in a professional and real way, with also being Genuine. Willingness to teach!

I had a couple of favorites, I can’t choose just one.

Being released from South Carolina St. I overcame it by maturing, and growing mentally!

Yes, after pre game meal, I actually go to sleep until about 45 min before my position group go out, then I wake up and get taped and start my warm up routine while listening to Michael Jackson!

What was the most memorable play of your collegiate career

Jumping over a 6’8 Receiver to intercept the ball, and then returning it for a TD.  Intercepted two passes against him that game.

Coolest thing would have to be Participating in the Tim Tebow foundation, where I got to be a prom Buddy with one of my special need friends, and helping him propose to his Girlfriend on prom night! She said Yes !

I never really had a favorite team growing up, But i would root for my home team.