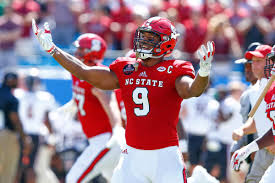 PROS: Plays with a very high motor and does not quit on plays. Chubb also plays for 4 quarters and wears down O-lines for 60 minutes. Great team leader and displays an energy that teammates feed off. Displays lots of burst off the edge and can beat offensive lineman with techniques, both inside and out. Uses his hands well to get around the edge and has enough speed to get to mobile quarterbacks. Has really good size and long arms that he uses efficiently to get into the backfield and disrupt plays. He plays the run well and is a dominant presence on the edge against opposing running backs. 190 career tackles, 53 tackles for loss, 25 sacks, and a handful of forced fumbles make Chubb a statistical dream for the draft, and his play on the field backs it up. He should be a first-round prospect come April.

CONS: Has been known to get beat in run blocking and sometimes gets handled at the LOS against the run. His speed and energy also mean that he over-pursues at times and runs past the play. Coaches have asked him to drop into coverage in the past and, while adequate in those situations, his pass coverage is overshadowed by his abilities as a pass rusher. He is also a bit heavy at 275 and will likely need to shed a few pounds once he enters the league.

OVERALL: Chubb has the physical tools and abilities to play in multiple defenses who run a 3-4 or 4-3. That versatility bodes well for his chances to make an immediate impact in the NFL.  One thing that stands out about him is his use of his hands. I have seen him use his hands to get in the face of players much larger than him and to evade chip blocks from players coming out of the backfield. What you really have to like about Chubb is his pursuit, which can set him apart from other defensive linemen in an NFL that includes a variety of dual threat quarterbacks in the modern era. He has also made a few special plays on special teams during his college career, which will help him contribute immediately in his rookie season.