Mother, mainly because she has been the one telling me all my life to never give up on my dreams even though others have been telling me otherwise. She’s supported me all her life by herself with some help from others and still manages to get by & support my football dreams.

Dr. Joe Moore from Central I would say was my favorite professor mainly because he made sure I stayed on top of my work & knew that being a collegiate football player the discipline was there so he was hard on me every step of the way to help better myself for the future.

I played basketball since I was 7 & still to this day try to play as much as I can. Football & Basketball were my life growing up.

A former teammate who played DB for Central named Tevin Teamer was probably the toughest DB I’ve ever had to play against in my career. He always pushed our receivers during 1 on 1’s and other WR vs DB drills to better the team overall.

DT, Connor Flagel I’d say is the most underrated player on the team or really any defensive lineman for that matter. Lineman don’t really get the credit they deserve. 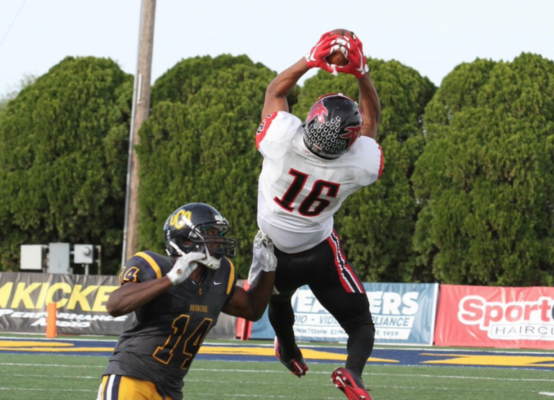 I’m a Believer – Tedashii for sure is the one song I listened to before every game prior to the warm up before the game. This song just helps me remember to always believe that you can get whatever done that is meant to get done. In this situation a win.

Anquan Boldin easily. He is the type of possession receiver I can honestly say I play like without a doubt. Clutch on 3rd down and big bodies DB’s.

Being told my entire life that I should try a different sport even at the little league age. Being told I won’t be able to play high school or college ball by numerous coaches. I overcame that obstacle by not giving up and continued to surround myself by supportive people, contacting the right people, and staying consistent with what I wanted to prove to all my peers. Nothing happens overnight and I want to be someone one day that I can tell my story too and give life to others that went through the same struggles as I did.

Pray. Growing up going to a Catholic school until college taught me a lot about praying and believing in God.

Scoring the winning touchdown against Pitt State University in 2016.

Help an old lady that I didn’t know carry groceries in from her car.

Chicago Bears. Reason for this is because I was a huge Brandon Marshall fan. After going to Halas Hall and seeing all the facilities my freshmen year of college I fell in love after that.

Martellus Bennett, Michael Bennett, & Jesus Christ. These three people struggled hard in different ways to get where they wanted to be & I’m curious to what they did to not give up along the way.