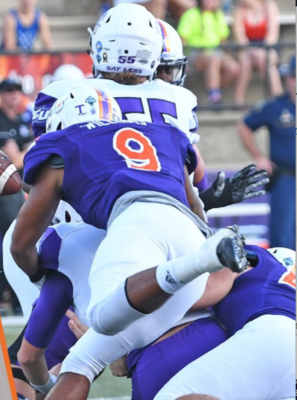 Former Jets running back, Clarence (Jazz) Jackson, my mentor, his knowledge and experiencein the game is amazing, and his ability to persevere with the trials and tribulations against him.

Ms. Jen Gerlach, she was my advisor, but she helped me with everything. Making sure I was on top of my work and keeping me level headed.

Brian Brown (Dallas Cowboys/Richmond WR) his route running ability is top notch. His speed is tricky as well he doesn’t give any hints off the line like normal receivers.

It would have to be McKane Lucky WR, he is a sure handed slot receiver with height and strength, which makes it pretty hard to jam him at the line and challenge him in the air.

Deone Bucannon, he is a hybrid that has the ability to cover receivers in the slot, and come down in the box and be just as productive as well.

My mother being without a job for awhile, it made me mature on and off the field, while making me more dedicated to my craft to get into a better situation.

I usually warm up to 90’s music like Biggie, Nas, or some R&B, and eat a pack of starbursts.

My most memorable moment was a sack fumble that I had against Abilene Christian. After coming back from an injury it just felt good to be back.

I mentor some high school kids that are struggling in back in my hometown. Probably the coolest thing was take a kid to an amusement park for the day just to see the look on his face was priceless.