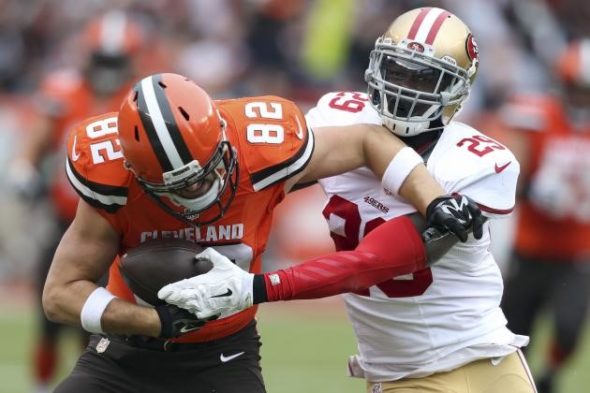 It’s still too early to tell who will go first in the 2018 NFL draft next April in Dallas, Texas; there is still plenty of football to be had and surely, there will be a lot of potential overall pick number jockeying as the rest of the college football season plays out.

One thing is for sure, it’s looking like the Browns and the Niners are going to be battling it out for the number one pick, yet again … Which is a bit surprising because I thought that it would be the New York Jets who would be in full-on tank mode this season. But, the Jets are actually trying to win and it is the Cleveland Browns and San Fransisco 49ers who will drag their feet as they sullenly trudge into Week 9, with heads hanging low on the limp necks of deflated pride.

That leaves an interesting question: of all the draft prospects, will either of these teams take a talented young QB with their –most likely very high—first round picks?

The Browns are locked and loaded at QB with tons of young talent. DeShone Kizer (21), Cody Kessler (24) and Remember that dangerous Stanford QB who would march down the field on pretty much any defense … yeah … Kevin Hogan (25) is just rotting away on the bench. Cleveland: the city where good quarterbacks’ careers die.

Many thought that the 49ers would chase the soon-to-be-free-agent, Kirk Cousins and that there would be a new Captain in San Fran, but Lynch shocked the world by swinging trades for Jimmy Garoppolo on Monday night! Now San Fransisco has a capable young QB who not only has had the opportunity to spend a couple of years learning from the best in the business but proved that he can perform while he stepped in briefly for Brady. Garoppolo also comes with the benefit of a much cheaper price tag and is actually one of the guys that were at the very top of Kyle Shanahan’s 2014 draft list.

Josh Rosen (UCLA), Josh Allen (Wyoming), and Sam Darnold (USC) started the season as potential franchise builders … but in my humble opinion, their stock is dropping. Even last year’s Heisman winner isn’t looking like a Round-1 top-10 pick … perhaps he could convert to tailback.

Even Washington State’s Luke Falk, who has helped Mike Leach continue to perfect his ‘Air-Raid’ offense has shown nuclear reactor worthy melt-down moments. Enter five interceptions under the Friday night lights in Berkeley. Will they drop their #1 and #2 picks on a mediocre QB draft class when they already have talent? If so, would it just be for trade-fodder?

What teams like the Browns and 49ers really need, are offensive draft prospects like, OT, Mike McGlinchey of Notre Dame, and OT, Trey Adams, of Washington and Guards such as Billy Price of Ohio State and UTEP’s Will Hernandez. But it is not often that offensive linemen go early in the draft. The most notable of late was Jake Long in 2008, who was fantastic until he blew his ACL, effectively ending his career in 2013.

The New York Giants & LA Chargers could end up right behind the Browns and Niners. Even though the Giants have Geno Smith and a 22-year-old Davis Webb to back up Eli and the Chargers have Cardale Jones and the career backup, Kellen Clemens, neither team has a franchise man. So, would a Josh Rosen, Clayton Thorson, or Josh Allen be on their lists?

A very good indicator of draft order is how draft prospects are valued on the betting odds boards. But it’s so early that those lines have yet to have been released. We’ll have to check in with Bovada Sports for draft odds as we get closer to bowl season. There is still a lot of tanking to do in the NFL and a lot question marks that need clarification in college ball. We’ll likely see draft stock rise and fall and pick orders change. So, get out your popcorn, because this is going to be more interesting than all the winter blockbusters rolled into one!