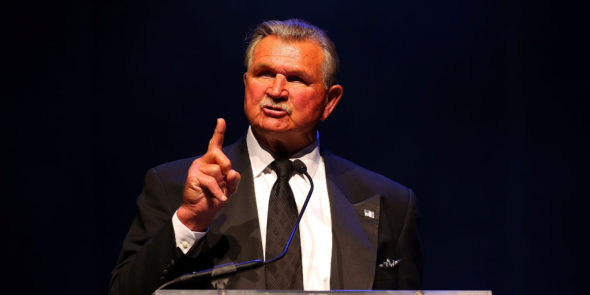 Former Bears legend Mike Ditka is trending right now on social media for his moronic comments made.  This is something else, and I feel this is the problem with America right now.

“I don’t see all the social injustice that some of these people see,” Ditka said late in the interview.

“There has been no oppression in the last 100 years that I know of. Now maybe I’m not watching it as carefully as other people.”

Just so you have a better understanding of how ignorant those comments are, the Civil Rights Act of 1964, was less than 100 years ago….JUST SAYING.

“Is that the stage for this?” Ditka asked. “If you want to protest … you have a right to do that. But I think you are a professional athlete. You have an obligation to the game. I think you have to respect the game. That’s the most important thing. I don’t see a lot of respect for the game. I see respect for their own, individual opinions. Opinions are like noses, we all have one. Some are good, some are bad.

“I’m not condemning anybody or criticizing anybody. Respect the game. Play the game. When you want to protest, protest when the game is over. Football has been so good to these guys. Enjoy it. Have fun with it.

“I don’t think it’s the stage for protests, I’m sorry.”

Ditka said this next when asked if he would bench players who kneeled.