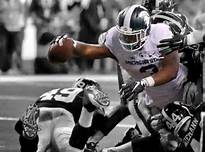 Junior running back L.J. Scott was arrested Wednesday in East Lansing for driving on a suspended license. It’s the seventh time Scott has been arrested for this specific violation. YES, you read that correctly.  SEVEN TIMES!!!

Many believe Scott will leave the Spartans early and enter the 2018 NFL Draft, but this is not going to help him.  This year he has 408 yards on the ground and has scored four touchdowns. According to the Lansing Journal, he was released on bond.

“SCOTT, 21, WAS ARRESTED AND LATER RELEASED ON A PERSONAL RECOGNIZANCE BOND, EAST LANSING POLICE SPOKESMAN LT. CHAD CONNELLY SAID THURSDAY. HE DECLINED TO COMMENT FURTHER BECAUSE SCOTT HAS NOT YET BEEN ARRAIGNED,” THE LANSING JOURNAL REPORTED THURSDAY.