NFL Commissioner backs Seahawks Michael Bennett; Should have did this for Kaepernick 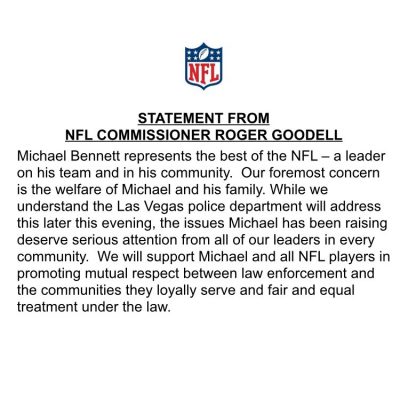 Today Roger Goodell made a comment about the Michael Bennett situation, and it is very good. A matter of fact, it would have been very good to see after Colin Kaepernick first took a knee, when young unarmed black men were being killed by police.

I know I will take a bunch of criticism for this post, but I do not care.

According to Las Vegas Metro Police Department undersheriff Kevin McMahill says investigators are combing through hundreds of videos associated with the incident but featured 1 bodycam video that he believes helps tell the story, according to TMZ Sports.

McMahill says cops had responded to an active shooter call at The Cromwell hotel around 1:30 AM on Aug. 27th … and when they arrived, teams of cops were focused on clearing the casino and hunting for the shooter.

McMahill says the bodycam shows officers clearing out dozens of people from various races. He says officers only chased Bennett when he acted suspiciously during the intense search.

McMahill says “due to Bennett’s actions … they believed Bennett may have been involved in the shooting and they gave chase.”

McMahill pointed out that both officers involved in detaining Bennett are Hispanic.

McMahill says an internal investigation is underway — but at this point, “I see no evidence that race played any role in this incident.”

The commissioner is saying that he backs up Bennett, and his concerns.  The police are saying something different. This will be interesting to see where it goes, but if the Commissioner had said something about the young children being killed by Police, would Colin Kaepernick be in the league?  Ask yourself that question…..

If that pisses you off too, this will fire you up: