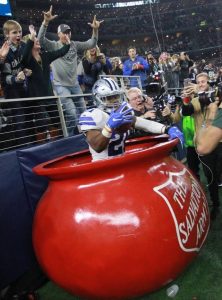 Right now the Dallas Cowboys are suffereing from the wrath of the NFL.  The NFL is suspending the Cowboys superstar for an allegation of domestic violence. The NFL concluded that Zeke placed his hands on a former girlfriend and has been suspended without pay for the first six games.

The crazy thing is that the accuser reportedly was in a fight a day or so before the actual incident she called the police.  Here are a few pieces of media I think should be getting shown as well.

If Ezekiel Elliott did actually do the crime then the prosecutor should be fired. I feel the prosecutor did his job in this case as well, and it sounds like the NFL is just trying to flex like they are doing something because in the past they dropped the ball.

So you’re talking about pics of bruises Elliott allegedly caused, but here’s some proof of her definitely lying. Get those tweets off tho. pic.twitter.com/sePRcaREYO

Or another witness that was there that night that saw absolutely no contact between the two pic.twitter.com/YKJMh6yDI8