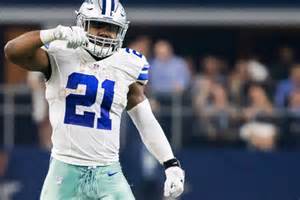 One NFL executive told B/R’s Mike Freeman that throughout last season several Cowboys teammates, several former Cowboys players and even someone close to the league office all stressed to Ezekiel Elliott that he has to be more careful about his choices off the field.

There was a concern that Elliott, who was named to the All-Pro first team in his first season after being drafted fourth overall by the Cowboys in April 2016, didn’t fully understand just how big a name he’d become. Well another former Cowboy had advice for Dorsett.

“Sometimes you got to be a little standoffish. You can be appreciative, ‘Thank you for all of this, but no I don’t want to go there. I’m not going there. I’m not going to do this.’ Plus you get caught up into positions. Then you go to a party. You don’t know these people, but some people take you to a place. You don’t know who they are, and then something goes down. The first thing they’re going to do is not going to be their names that’s splattered all over the Dallas Morning News. It’s going to be his name.”