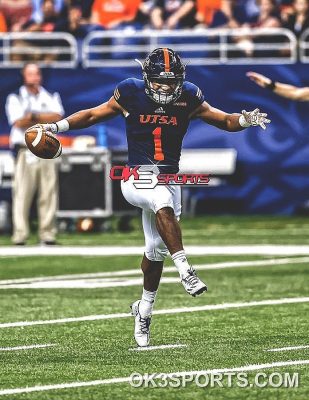 Strengths: At first glance, Davis has the size, length, and athleticism of an NFL cornerback to compete against any receiver that lines up opposite of him. He shows versatility as he can be used in man & zone coverages, press, and as a pass rusher. He plays with good speed, allowing him to mirror a receiver, and stay along his hip or back pocket on deep routes in man coverage. When playing zone coverage against short & intermediate routes, he shows good closing speed to break on the ball to make a play. He’s very physical in press coverage, when disengaging blockers, and when bringing down ball carriers in run support. With his size & length, he isn’t afraid to compete for the 50/50 ball.

Weaknesses: While Davis can play man coverage well against deep routes, he showed that he tends to lose his man on short & intermediate routes at times. On a few occasions, he looked to allow his receiver to get a step on him on deep routes while playing zone coverage. He doesn’t have much experience playing against FBS competition as he played against JUCO teams before transferring to UT-San Antonio.

Summary: Before suiting up for the Roadrunners, Davis made his mark on the JUCO level at Merced Community College for 2 years, recording 74 tackles, 2 forced fumbles, 3 fumble recoveries, 7 interceptions, 11 pass breakups, and 1 defensive touchdown. In 2016, he racked up 26 tackles, 2 tackles for loss, 1 interception, and 6 pass breakups in 3 starts. Davis looks to improve on those stats in the 2017 season. On tape, he shows that he is athletic enough to do a bit of everything: play man, play zone, press, blitz, and provide run support. Consistency will be big for Davis in his development as he gets more starts against FBS competition. If he can improve in man against short & intermediate routes, and improve in zone coverage against deep routes, he should put up numbers that would allow him to hear his named called in April.