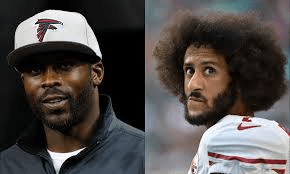 Michael Vick was a very criticized player when he played in the NFL, and this past week he took a shot at another highly criticized player. Many felt Vick was wrong about his statements on Colin Kaepernick, and Vick believes he was wrong now too. In an interview on “The Dan Patrick Show” Thursday, Vick said he is “truly sorry” for saying Kaepernick remains a free agent because of his lack of football ability and his hairstyle.

“What I said, I should have never said,” Vick admitted, via Michael David Smith of Pro Football Talk. “I think it was taken out of context in regards to what I was trying to convey, but I only want to help Colin Kaepernick. I’m not a general manager, I’m not the guy who makes the decisions on getting him signed, and I’m truly sorry for what I said. I think I should have used a better choice of words.”

Vick said this on FoxSports1 earlier in the week:

“His afro has nothing to do with him being signed and I wasn’t trying to relay that message,” Vick said. “It was more about helping him at the end of the day.”

It sounds like either Vick had a change of heart, or he was taking too much backlash for his comments. What do you think?