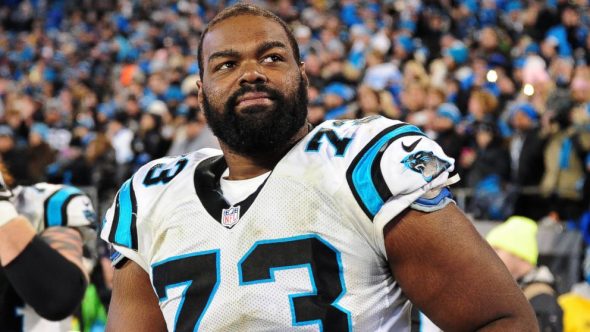 Michael Oher was pretty vocal when he found out that Dave Gettleman was fired. Many believed that Michael Oher was cut because he made comments supporting Gettlemen, but that was not the case. This was the comment made:

Guy really cares about you as a person just not the player also his [sic] always interested in how your family is as well,” Oher wrote. “Hated to hear that news but I know he’ll be fine. And for the people downstairs who are happy and had something to do with it downstairs, Karma’s a MF!!”

Interim general manager Marty Hurney made cutting Michael Oher his second move since being hired Wednesday. Earlier in the day, he gave right guard Trai Turner a four-year, $45 million extension with $20.45 million guaranteed. The move of releasing Oher saved the team 1.69 million dollars.  He had three years remaining on his contract.

Oher tweeted Thursday after his release that the “brain is a scary thing.”

The Brain is a scary thing. You have to be careful with it.

It sounds like concussions are the reason Oher is struggling to pass a physical.  This is the comments from head coach Ron Rivera.

“The most important thing is his health,” Panthers coach Ron Rivera said, according to the team’s website. “Michael’s health always came first. We were not going to force the issue. Michael understood and we expressed that to him.”