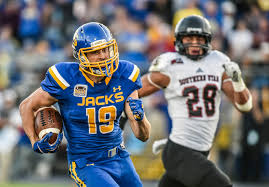 Who is Jake Wieneke? If you are not from South Dakota you probably not aware of how amazing number 19 really is.  Well let’s look at a few amazing stats from the 6’4 wide outs past.

He has recorded four of the top 10 single-game receiving yardage totals in program history, and also topped 100 yards receiving in a game 23 times entering 2016 season. Jake also caught a touchdown pass in 26 of 39 career games and has 13 multi-touchdown games. Listen folks, this kid is a draft pick.  It is pretty simple to see. He is the best wide out in the FCS, and will be drafted in the 2018 NFL Draft. I interviewed Jake and asked him some questions you may not know about him, or his team. Check it out:

To win a National Championship.

Jordan Brown, he is a corner for us and he is a beast! He is a bigger corner and can do everything. He is smart, he can run with you, he can play physical, he is just an athlete. It’s always fun going against him in practice because you know that every rep will be a battle.

Jake Menage, all he does is work. Everything he does on and off the field is to get better. He is constantly growing as a football player and as a man. He is a leader on the team, even though he isn’t labeled as captain. Everybody on the team looks up to him and when he speaks, you listen. When he does something, you do that as well, because you know it is the right thing to do. He does so much for the team and the young guys that most people don’t notice.

I have had a lot of great memories in college but my best was seeing our Coach Stig’s smile after we won the conference last year.

Against NDSU we ran a trick play where we hid our running back Brady Mengarelli and we all ran the opposite way and he waited for a second and then ran into the end zone for a touchdown. It’s a play we practiced all year and when we finally ran it I couldn’t believe it.

I was blessed to lead a youth group at a local church over the past two years. It was a blessing to watch the young men grow and mature. I’m sad that I will be leaving Brookings so I won’t be able to see them every week. They are a group of high schoolers who came with energy every week ready to test my patience and teach me at the same time.

I was assigned it my freshman year of high school because it was the only receiver number left and I loved it so I have kept it since then.

I am a person who works as hard as I can everyday to be the best I can be. I love football, and I love winning.