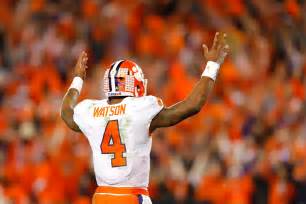 The Houston Texans are a very solid team, but their quarterback play has been atrocious over the past several years.  Now the Texans, have a quarterback of the future, and their assistant Wes Welker who caught passes from Tom Brady, had some great things to say about the rookie Deshaun Watson.

“I think he has a great work ethic,” Welker said. “I think that’s one of the key things that I’ve noticed from him is just the way that he handles his business. Kind of the demeanor that he has. He has a winning attitude which was showed on the field there at Clemson. I think the work that he’s going to put in that you have to have and the repetitions that you gotta go through. Not only physically on the field but mentally in your head of studying and being on top of everything day in and day out. I’ve been impressed with how he’s kinda handled himself and the way he’s gone about his business.”

If Watson can be the guy in Houston, he could turn into the rookie that has a huge year ala Dak Prescott.  Watson has weapons, and just needs a platform to perform.