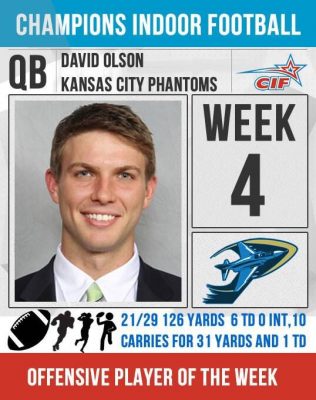 Today the Baltimore Ravens found out bad news about Joe Flacco. Their star quarterback could miss 3-6 weeks with a back injury. There have been rumors that Colin Kaepernick could be called by the Ravens if Flacco misses more time.  Well today the Ravens signed a quarterback who has never really been given a true chance to shine.

David Olson the former Clemson and Stanford quarterback who recently played with Kansas City Phantoms of the CIF has signed with the Ravens.  The CIF is the Champions Indoor Football League.  It is similar to Arena Football, but on a lesser level. Olson has a big arm and has the prototypical size.  He has never been given the opportunity to shine, but now will get a break.  Olson played for John Harbaugh’s brother Jim at Stanford.  So I am sure John has a pretty good idea about the quarterback he is getting to work with.

Here is a clip of Olson: