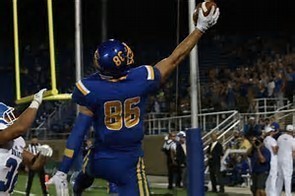 Dallas Goedert is the top prospect in 2018 NFL Draft for small schoolers. We are honored to interview him this season. Good Luck brother!

Goedert does not just catch the ball well, he can block and stretch the field. This year Jake Wieneke and Goedert are going to be very difficult for their opponents to cover.  I talked to several scouts this past week and they all told me Goedert is the best tight end in the entire draft.  If that is the case, Goedert could hear his name called as early as the first round.  Let’s meet Mr. Goedert himself in our interview with a small school hero:

As a small schooler how are you planning to separate yourself from the other big school players?

To separate myself from bigger school players I plan to out work them in everything I do, whether its in the weight room, at practice or in the film room.

Ryan Earith, he is a returning starting defensive end for us and he brings his best everyday to practice and is very competitive.

Jordan Brown is a shut down corner that has been great for our program, and has not received the recognition he deserves.

When we went up to NDSU and beat them at home on a last play touchdown pass from Taryn to Jake was the most memorable game of my college career.

I had a one handed catch against Drake that was number 5 on sports center top 10 plays. That was the coolest play I have been apart of.

Working with FCA I was able to coach a youth flag football team. Being able to teach the youth about God and football was a very cool experience for me.

My current number was assigned to me after my red shirt year and once I got it I fell in love with it.

I am a competitor and my will to win drives me to work my hardest on and off the field to be successful. I love football and want to continue to play it for many years to come, so I am doing everything I can to achieve that goal.