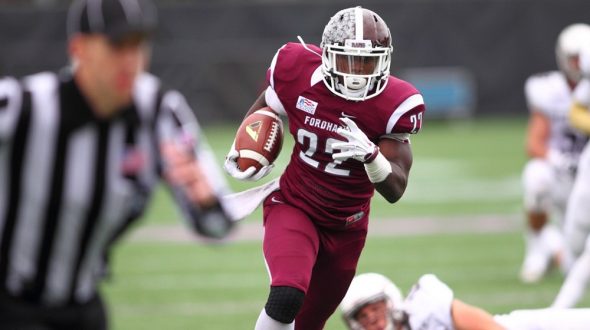 Since 2014, Chase Edmonds the Harrisburg, Pennsylvania native has been one of the most dominating players to touch the field in the FCS.  He was the first Freshman to ever rush for a 1000 yards at Fordham, and only the sixth ever to do it.  He was the winner of the Jerry Rice Award for the best Freshman.  He has almost broke every record as a running back in Fordham history and he will likely be the highest Fordham runner to get drafted since Len Eshmont back in 1941.

Edmonds runs hard and is elusive. Several NFL teams have told me he is one of the most underrated backs in the draft, and I would not be shocked if he is drafted in the 2nd round with another amazing year.  He is a dominating player, so let’s learn a little more about him.  Below is our interview with a small school hero:

By improving in the little details as a RB. My main focus is to vastly improve in pass pro

Toughest player on the opposite side of the ball is max Roberts. People don’t know his name yet but they will. His speed is what makes him great and he’s the biggest physical freak on the team by far

That was a tough question so I’m going have to do most underrated player on both sides of the ball. For offense it’s Isaiah Searight. He’s an absolute beast and he does great in the run game blocking. For the defense I would say Dylan Mabin. He’s going to be a great cornerback for us this year.

Most memorable play in my career is probably this 54 yard td run I had against Monmouth. This past season.

I haven’t done many cool things off the field for people but one thing I do pride myself on is making sure that any kid who wants an autograph or picture. No matter how the game turned out or wherever I am. I make sure to take that picture and sign it with a smile on my face. I remember being that kid and looking up to people.

I’m the hardest worker period. There may be more talented players than me in their opinion but there won’t be a man in that locker room that will out work me and want to succeed more then I do. I love this game. I put my absolute all in this game. And I will prove my doubters wrong in the end.