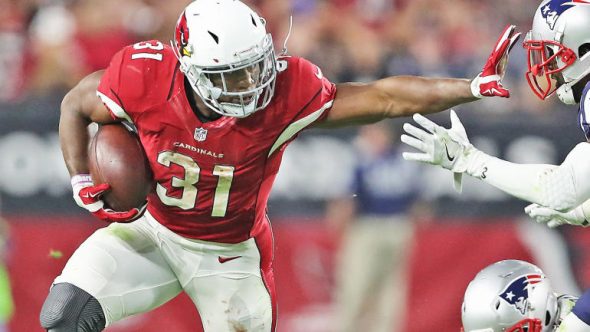 David Johnson the former University of Northern Iowa running back is a special player. He is one of the toughest, fastest and amazing players at the running back position. He told Fantasy Sports Radio that he cannot wait to touch the ball 30 times a game, like some of the other backs in the NFL.

Johnson also talked to Jon Machota of the Dallas Morning News about how the NFL values Running Backs.

“I feel like there’s room for me to definitely carry more,” Johnson told SiriusXM Fantasy Sports Radio at the National Fantasy Football Convention on Sunday. “I think the biggest thing is me learning and getting better and improving. So I feel like I can definitely get that 30 touches, not all rushing obviously, 30 touches per game.

“I feel like I definitely have the ability to do that just because I’m a young guy still in my first contract, feeling great — knee’s 100 percent, no problems — and I’m ready to go.”

Cardinals RB David Johnson on the difference between NFL and NBA contracts: pic.twitter.com/OkcTVvSMS7