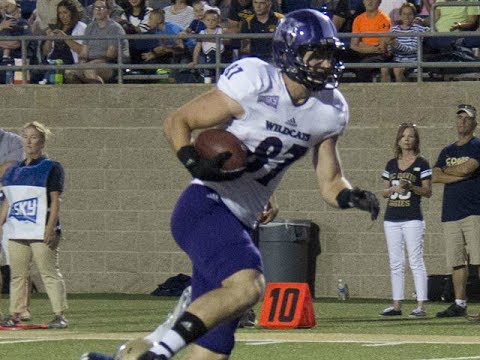 Andrew Vollert is not a household name right now, but give it a few years.  There is something about this kid that assures me he is going to be a stud.  I have been watching college football for years, but I think Andrew Vollert is as talented as they come.

The 6’5 tight end from Weber State is a smooth route runner with great hands.  His big body makes him a terror for opposing defenses.  He will be a monster in the  NFL, and I feel bad for the teams who have to cover him this year.  Get ready for a monster year.

To win the Big Sky.

I’m a believer that greatness takes no days off.  I try to get better every single day and while other players might take a day off, I’m always working as I continue to chase greatness. My dad has always told me that in life – and especially in sports – you can’t control much, but you can control how hard you work. I’ve always worked as hard as I can to be the best player I can be, so I’ll continue to take no days off to separate myself.

Our cornerback Taron Johnson is the toughest player I get to compete against. He’s a great press corner who is long, explosive, and has great feet. He’s unbelievably patient with his hands and doesn’t make any mistakes. He’s great against the run too because he’s so physical. He literally locks down 1/3 of the field for our defense. Dude is a stud.

Our LT Iosua Opeta is underrated. He switched from DE to OT last season and still earned honorable mention honors in 2016 as a sophomore. He has the quickest first step I’ve ever seen. He protected our QB’s blindside last year and despite just picking up the position, was a stud for us all year. He’s a safe bet to be a future First Team All-Conference guy.

We were playing in-state rival Southern Utah last season down at Cedar City last season. ESPN’s win probability algorithm gave us a .1% chance to win the game as we were down 22 points with just under 9 minutes left in the 4th quarter. We stormed all the way back to complete the wildest comeback I’ve ever been a part of.  It was the coolest game I’ve ever played and the most hyped locker room I’ve ever been in.

On the last play of the Southern Utah game I just mentioned, they attempted a Hail Mary from the 50-yard line. I was put in to knock the ball down and end the game. Our defensive line got some pressure so their QB had to chuck it up early. The ball was fluttering in the air and was headed right towards me. So, I did what any offensive player would naturally do and intercepted the pass. I kneeled in the end zone and helped complete the biggest comeback in our school’s history. That whole game was insane.

I love coaching football camps and participating in programs involving children, but my favorite thing is simply giving out my gloves after home games to little kids. I used to not think much of it, but one time last year a boy’s mother came up to me five minutes after I gave her son my pair of gloves. She had tears in her eyes and gave me a hug, even though I smelled how a football player should after a game. She told me her son thought the gloves were the coolest thing in the world, but was too shy to come say thanks. So, I approached her son and chatted for a bit before squatting down for a picture. They were both so grateful and whenever I think back on that, I’m reminded of the positive impact that football players can have on people.

I picked 87 because I’m a huge Travis Kelce fan. I just love the way he competes. You can tell he genuinely loves the game of football and has a ton of fun playing it.

I’m a competitor who simply loves playing football. My passion for the sport has instilled a maturity and work ethic that has led me to believe that I’m skilled, athletic and smart enough to beat anybody.