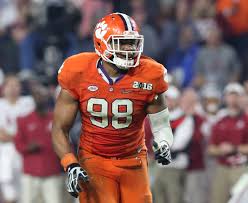 Last year the Tennessee Titans drafted Kevin Dodd from Clemson in the second round with the first pick of the 2nd round.  They were hoping he would be a standout player for them, but that has not happened because he has been fighting a foot injury.

Dodd had a second surgery on his problematic right foot in January, which has led to his latest stint of recovery, according to Paul Kuharsky of ESPN.com

“I’m not really doing anything to stress it right now,” Dodd said. “I really can’t tell you that much. But I feel fine walking around.”

Dodd initially had a surgery last May to insert a screw in his foot, which landed him on the injured reserve. Dodd wanted to be ready for the start of training camp, but it may not happen now.

“It’s never fun being a spectator,” he said. “I want to go out there and do what I do. I know there are a lot of questions from everybody, I’m a bubble to everybody. I’m going to do what I’ve got to do when I get out there.