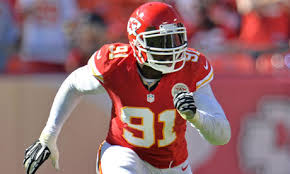 Tamba Hali has been through three different general managers in his tenure as a Chief.  Hali did not have much success until John Dorsey and Andy Reid turned things around, and for that Hali says he was caught off guard by the firing.

“From a subjective opinion, I wasn’t too pleased,” Chiefs veteran linebacker Tamba Hali said Monday on NFL Network. “I’m really fond of John. Mr. Dorsey, he’s done a tremendous job since he’s been with the organization so everything that happened the past week really caught a lot of us off guard. But I’m sure the Hunt family knows exactly what they’re doing with the re-signing of our coach Andy Reid. I think everything will be fine but Mr. Dorsey will be missed with the Chiefs.”

Hali is a smart guy, and I wonder how the others on the team are feeling.  Remember Dorsey signed Hali to his last deal, so that could help his attachment to Dorsey.