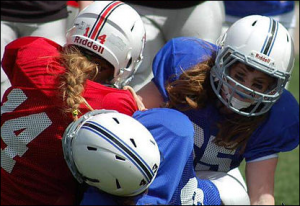 Should the young female student athletes be allowed to play?

Well that is not the message several Utah school districts are sending to female student athletes.  According to a report from the Salt Lake Tribune, six Utah high school students filed a lawsuit in US District Court against three different school district, citing a lack of girls’ football teams.

The Jordan, Canyons and Granite school districts discriminated against female high school students by not providing them a football team, the lawsuit alleges.

The parents also are suing the Utah High School Activities Association and the superintendents of each district.

I am not sure if they will win or not, but one of the females was pretty solid. She actually helped form the Utah Girls Tackle Football League in 2015. Over 200 girls signed up for the league, but they are being told they cannot participate with the boys.

Well let me add in my opinion. When I was a kid we had a girl named Chantel that played on our team. She started at middle linebacker and hit way harder than any guy, so if you are saying they cannot play, I will be to differ. Fix your rules Utah, give them a shot.