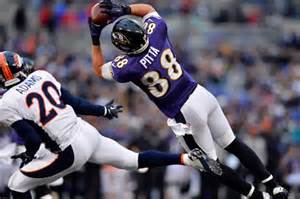 Baltimore Ravens tight end Dennis Pitta may have to retire

This sucks for Pitta. The guy rebounded well last year catching 86 passes for 729 yards and 2 touchdowns.  Pitta’s career could be over now. He had injured his hip three times in four years.

Fear is Ravens TE Dennis Pitta fractured and dislocated his hip for third time in four years. If so, NFL career likely would be over.