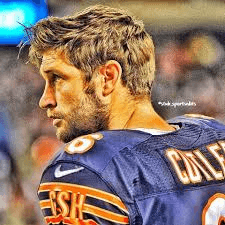 Martellus Bennett has played with some amazing quarterbacks.  He started off with Tony Romo, then went to the big apple with Eli Manning, after spending three years with the Bears and Jay Cutler before leaving for New England and now with Green Bay.  Out of all the quarterbacks, Bennett told reporters that Aaron Rodgers was the best quarterback he has ever played with.

“Aaron, I love you,” Bennett said. “He’s a really smart guy, he’s just really laid back, really cool and it’s been fun working with him so far.”

Bennett chose Brady as the No. 2 quarterback he has played with. At No. 3 is a big surprise: Cutler, whom Bennett played with for three years in Chicago. And Bennett says Manning, who was his teammate for only one year in New York, was better than Romo, Bennett’s quarterback during the first four years of his NFL career in Dallas.