Is Le’Veon Bell planning on holding out for a new contract? 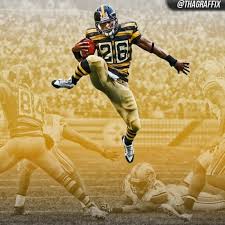 Le’Veon Bell could be holding out for a new contract

The Pittsburgh Steelers slapped Le’Veon Bell with a franchise tag which would pay him 12.1 million this year, but Bell has refused to sign it. If he did sign it he would be the highest paid running back in the NFL.  Well Ian Rapoport talked about the situation yesterday and it sounds like Bell could be ready to hold out.

“For the Steelers and Bell, neither side seems particularly worried about it. Pittsburgh clearly prioritizes him, and though there hasn’t been an update for some time, it has engaged in some negotiations with him,” NFL Media’s Ian Rapoport reported on Wednesday. “Bell surely will want to be the highest-paid back on a long-term deal, though he already set to make $12.1 million on a one-year tag.”

Could Bell be looking to hold out until he gets a new deal?