Are the Jets “Sinking for Sam”; NFL executive says they have the worst team in past decade 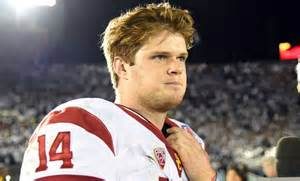 Sam Darnold is the prize for the worst team in the NFL.  If you do not know he is the quarterback of the USC Trojans and the number one rated quarterback going into the 2017 NCAA Season. Well it honestly seems like the New York Jets are trying to suck on purpose to land him.

“The thing that worries me is that the Browns essentially tanked the season last year and no one said — except a few of us — said anything about it. And it may well be that this is something that can spread around the league, and I don’t think that’s good for the sport in the long run. Because in the end it robs the customers of the chance to see a competitive team,” Polian said.

Polian went on to talk about the Browns cutting Robbie Gould for Cody Parkey.

“They lost their placekicker to injury. Robbie Gould was out there. They signed a player with no track record at all,” Polian said.

Well this year it sounds like the Jets are next in line. One team exec told NFL Network’s Daniel Jeremiah that he believes New York’s roster is one of the worst the league has seen in the past 10 years.

From an NFL exec- “I think the Jets might have the worst roster I’ve seen in a decade.”