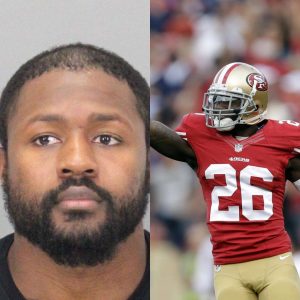 According to Branch, the domestic violence charge stemmed from Brock “allegedly punching and trying to strangle his girlfriend.”

Ex-#49ers CB Tramaine Brock has been charged by @SantaClaraDA with felony DV for allegedly punching and trying to strangle his girlfriend.

Tramaine Brock will be arraigned at 1:30 p.m. today; faces up to five years in prison, if convicted. #

Tramaine Brock also charged with misdemeanor child endangerment; his GF was holding their 1-year-old child during part of alleged assault.

Brock and GF had disagreement over what to watch on TV; he allegedly hit her in face; attempted to strangle her to point she later vomited.