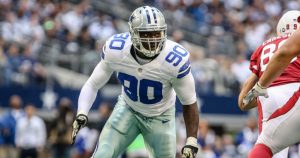 The Dallas Cowboys drafted DeMarcus Lawrence with the 34th pick in the 2014 NFL draft, and in his rookie year he had a huge season racking up 8 sacks and 35 total tackles. Then he went in a rut.

The former Boise State standout was suspended the first four games of 2016 and missed three games with a back issue.  Now he is vowing to get ten times the sacks he did last year. Remember he only recorded one sack last season in nine game.

“My goal is 10-plus [sacks],” Lawrence said, via the Dallas Morning News’ Jon Machota. “I feel like I can be a Pro Bowl player. I just haven’t lived up to those expectations.”

Lawrence better get his mind right, because if he wants to make the Pro Bowl, he will need to have a huge year.