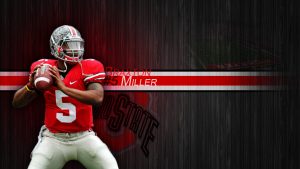 Braxton Miller is learning a new job and picking the brain of one of the best to do it.

How do you become great at your position? You better practice it, because at the end of the day practice makes perfect.  Well Braxton Miller the Texans slot receiver wants to know more about his new position. A matter of fact, he has been picking the brain of one of the best slot receivers to play the game.  Wes Welker is a coach for the Texans on Special Teams but Braxton Miller the former Ohio State quarterback has been picking his brain.

“The role he played is the type of role I’m playing in this offense,” Miller said Wednesday, via the team’s official website. “So it’s a great opportunity for me to learn from one of the greatest slot players to play the game. Especially in this type of system.”

“I’m always in his ear, bugging him, as you can see after practice,” Miller said of Wes Welker. “I was just asking him all types of questions. What did he see? What did I do wrong today? After every play, he’s always correcting what I did wrong. Then I just go out there on the next play and fix it.”

“Just being consistent,” Miller said of how he plans to improve. “Every time you come on the field, you’re going to get the same guy every day.”