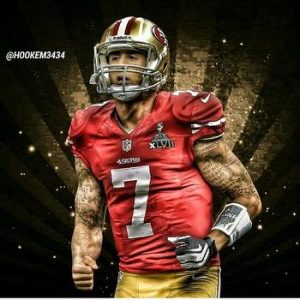 Colin Kaepernick is ready to prove his worth

Just how bad are things for Colin Kaepernick?  49ers GM John Lynch talked to Pro Football Talk about Kaepernick and his team, and Lynch was very up front about the situation. He said if Kaepernick would not have opted out they would have released him.

“I think we’ve been very up front with it…Yes, he was not going to be here under the construct of his contract. We gave him the option, ‘You can opt out, we can release you, whatever.’ And he chose to opt out, but that was just a formality,” Lynch said, via Pro Football Talk.

“I don’t want to characterize it as he made a decision to leave here. We both sat down and under that current construct of his deal, it was a big number…one thing I think Kyle (Shanahan) was very clear and I think Colin appreciated, is that Kyle has an idea of how he’d play with Colin Kaepernick,” Lynch added. “But he preferred to run the exact offense that he ran in Atlanta last year…if you change it for the quarterback, you change it for everybody on that offense. So he had a great discussion that I think gave Colin clarity, so we moved on.”

I hope he is able to get another shot, but it is looking like a far cry from this standpoint.