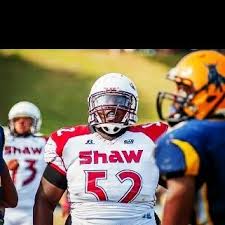 Strengths: Saddler is an offensive lineman who plays with a very high motor.  He doesn’t stop on a play until the whistle is blown.  He shows good size to be considered as a Guard at the pro level.  He is a versatile lineman who has experience playing every position on the offensive line.  He shows body control on most snaps, and strong hands to drive a defensive lineman back, or to turn him in or out with okay technique.  He shows pulling ability to be able to sustain a defender on running plays.  At multiple position on the O-Line, he can cut block well.  He looks to finish each play by taking a defender to the ground.

Weaknesses: He doesn’t always have the best first step at the snap of the ball.  He shows that he can be stiff when moving laterally.  He doesn’t quite have the size or quickness to be effective as a Tackle.  He tends to have trouble at times with speed rushers & other rushers with an effective swim move.  Will need to work on his hand placement in pass protection, along with his flexibility.

Summary: Saddler was a starter throughout his career with the Shaw University Bears from 2014 – 2016.  He is a versatile player that has experience playing every position on the offensive line.  While he might be looked at as being undersized at the Tackle position, he does have the size & skills to be looked at as a Guard on either side of the offensive line.  He’s a good player with a high motor, and doesn’t stop until he hears the whistle.  He has good body control, hand strength and technique on running plays to drive a defender back, or to turn him away from the ball.  While he is athletic enough to be able to pull, he looks to be stiff in his movements.  He can cut block well in pass protection, but he will need to work on his flexibility & hand placement in order to handle speed rushers.  At the next level, he can be considered as an offensive lineman who can become very productive with more coaching & development.

You can read our interview with Sheldon here.