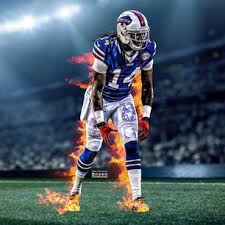 Sammy Watkins should be targeted at least 12 times a game

The Buffalo Bills posted a video on their site and Tyrod Taylor the Bills quarterback was asked about Sammy Watkins his star wide out, who the Bills are sort of pushing out the door.  Tyrod said some interesting things, and feels Sammy is working hard this year than he has in the year’s past.

“The maturation process has definitely sped up for him,” Taylor said of Watkins, via video posted on the team’s official website. “He’s older in the league, he knows what it takes, he knows where he wants to get and he’s working towards that, even down to eating right and putting the right things in his body. His attention to detail each day has definitely been different than the years past that I’ve been around him. He’s always been a hard worker, but you can definitely tell that he’s out there with the right mindset and with the positive attitude, trying to help the guys that are around him.”

Sammy Watkins has a lot to prove this year,  so I would not be surprised to watch him have a break-out season.  With the Bills declining his fifth year option he will be a free agent in the off-season.  So this is his “money year” so to speak. Players rarely play crappy in their money year, so expect a huge season from him this year.