Titans QB Marcus Mariota still is not ready to play 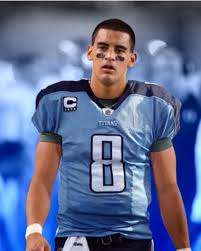 Titans QB Marcus Mariota will not be ready until late July

Marcus Mariota was a beast last year until he went down with an injury. He threw for 3,426 yards, 26 touchdowns and 9 interceptions, last year before suffering a major injury. Mariota will not be ready until July.

“We’re going to do some things that (Mariota is) going to be able to practice, do some things that aren’t going to subject him to (further injury),” Mularkey said, per Jason Wolf of The Tennessean. “We may do more 7-on-7s than we ever have done, just things like that to try to help him out.”

Mariota is not expected to be a full participant until training camp in late July, and the Titans are obviously not going to push him. The coaches would like him to get reps sooner rather than later with his new weapons, but understand that he may have to wait.

“You’re talking about timing in the passing game, that’s one way to be able to do it without a rush in his face and having to move,” Mularkey said of Mariota taking part in 7-on-7 drills. “It’s one way. We’re working on other ways to get the work done.”