Seattle Times reporter apologizes to Michael Bennett….or did he? 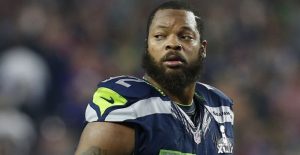 Michael Bennett has an apology to read when he wakes up

Matt Calkins wrote a really solid piece on Michael Bennett the other day, but at the end he wrote two paragraphs about an incident that happened and said Bennett was immature, and should have apologized to a reporter. Little did he know though that Bennett did, in fact apologize to the other reporter. .

In a follow-up column, Calkins admitted that he should have done a better job with his homework.

Sure, there is still a part of me that wonders why Bennett kept (the apology) private. If he is serious about being a role model, I feel like it would have been in his best interest to show his contrition to the world. But it’s also possible that Wixey, who couldn’t be reached for comment, asked Bennett to keep the apology between them so the story would die. I just don’t know.

What I do know is that I should have reached out to Wixey before posting my column. The fact that I didn’t was just plain lazy.