Could the Redskins Franchise Kirk Cousins a third year in a row? 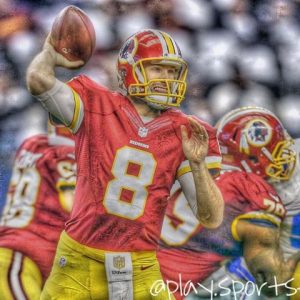 Could you imagine Kirk Cousins getting slapped with the Franchise Tag again?

I have never heard of a player being Franchised three years in a row, but Bruce Allen the Redskins president said it is very possible, and they will do it if they have to.

“Yes,” he said. “In the collective bargaining agreement, we really have one year and an option that we can do at the end of next season if we don’t get a contract.”

The transition tag carries a $28 million price tag, and the Redskins can match another contract but risk only receiving a possible 2019 third-round compensatory pick if Cousins walks.

Considering those options, another year on the non-exclusive tag might make sense. The NFL salary cap will be at least $168 million, which means Cousins at $34 million would account for about 20 percent of the Redskins’ salary cap, according to CSNMidatlantic.com.

34 million dollars?  That is insane that they would be willing to pay that for a quarterback alone.  I would hope the Redskins could get a deal worked out before that happens….WOW!!!