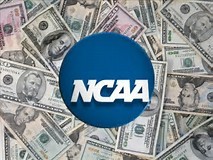 The NCAA is no better than the NFL, there are people making millions off kids

We already know coaches get paid millions and millions of dollars, but USA Today Sports obtained the NCAA’s new federal tax return and it was interesting.

NCAA president Mark Emmert made more than $1.9 million in compensation during 2015. Of course, that’s nothing compared to Big Ten commissioner Jim Delany, who is due $20 million in bonuses.

Here’s a statement by Minnesota president Eric Kaler, chair of the Big Ten council of Presidents and Chancellors to USA Today.

“Commissioner Delany has provided invaluable leadership for Big Ten member institutions while delivering first-in-class performance during a time of great transformation in college athletics. He has not only successfully balanced the missions of academic achievement, student-athlete development and athletic success, he has successfully developed the resources necessary to strategically position the conference for success well into the future. His compensation is market-competitive, based on an independent third-party analysis, and reflects the value and impact of his leadership.”

Ten other NCAA executives made at least $415,000.  It sounds like players should be getting paid to me.  Here is another piece from the USA Today: