Mike Glennon has been a pretty good teammate to Mitch Trubisky 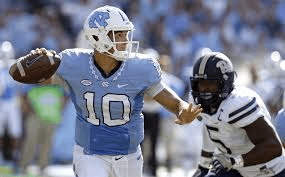 Mitchell Trubisky will learn the playbook with Mike Glennon

When the Chicago Bears drafted Mitch Trubisky many thought Mike Glennon was slapped in the face. Let’s face it he sorta was, but he is going to make a ton of money.

Hasn’t met him yet but Trubisky says Mike Glennon has been texting him since the draft pic.twitter.com/szgTKpv0Lq