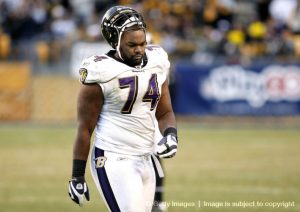 MIchael Oher is in bad shape

The Carolina Panthers offensive lineman Michael Oher showed up to Panthers camp out of shape according to a report from Joseph Person.  The Panthers have been supportive of arrest, but it is probably starting to wear on them.  The former movie star is still in the concussion protocol and he is still out of shape.

“Panthers officials seem to be willing to give Oher a wide berth to sort through his issues, although a source with knowledge of the situation says Oher is reportedly out of shape — a development his mug shot that was released two weeks ago appeared to confirm,” wrote Joseph Person of the Charlotte Observer.

Oher has 110 NFL starts and has never reported to camp with weight issues so this could into a bigger situation quickly.