Josh Norman says Dez Bryant is just “a guy”, and ODJ is just “a big kid” 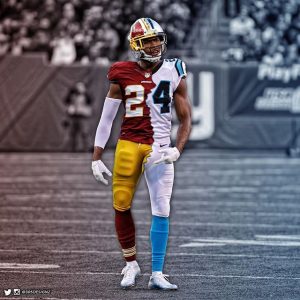 Tyler Dunne of Bleacher Report talked with Josh Norman who gave him one hell of an article. Let’s face it Norman always has something fun to say, but today he went in.  Norman called out Dez Bryant and Odell Beckham Jr.

“He doesn’t ‘wow’ you. For me, he don’t. For other guys, he probably will do the worst to them because he’ll bully them. But you can’t bully a bully. You know what I’m saying? That’s why his game doesn’t resonate to me.”

Norman went on to say Odell Beckahm Jr. is just a big kid.

“He tries to be a tough guy. He tries to put on this persona which he’s not. Because he’s always going to have his head on a swivel. Always. Always when we play each other. He’s scary like that. He does things that he normally wouldn’t do because of all the pressure and added hype that he has to put on his whole persona. He’s not this guy. If you go back and watch the games in which we play compared to the games we don’t play each other, he’s a totally different guy.”

Norman makes the Redskins/Cowboys-Giants games fun.  I can’t wait to see what they do this year.